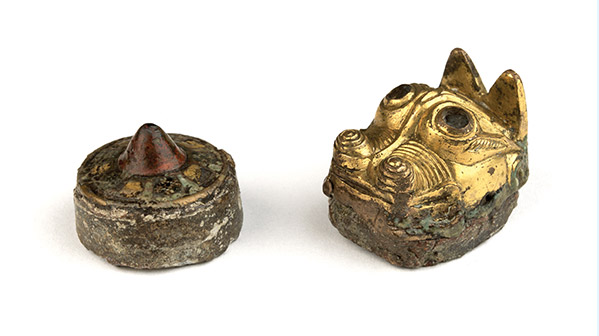 These weights were discovered in 1866 in a Viking grave at Islandbridge, just west of the centre of Dublin, and were first described by Oscar Wilde’s father, Sir William Wilde. They are pretty objects. Some are topped with gilt-bronze discs that were reused from stolen ecclesiastical metalwork, and others are trimmed with blue glass. The most impressive is in the form of a gilt-bronze animal head, with intricate decoration. The point of the objects, however, is practical, not decorative. They are multiples of the same weight unit (26.6g), which, as Dr Pat Wallace, former director of the National Museum, figured out, was the standard unit used in Viking Dublin. (That unit was slightly different from those used elsewhere in the Scandinavian world.)

What we see in these little objects is what can reasonably be called the beginning of capitalism in Ireland. ‘It’s all about weighing silver’, says Wallace. ‘It is from this process that we eventually get our first coinage in Ireland, in 997. This is the beginning of that: you are a merchant, I am a merchant, we are doing a deal. We both have a weighing scales. We do the deal in silver, and we have a lead weight to make sure we are not cheating each other’. The Vikings used ‘hack silver’— cut-off bits of silver objects—as a kind of small change. They used the metal for arm and neck rings that functioned both as practical, portable wealth and as status symbols: literally, flashing the cash.

It is unclear whether weights were used in Ireland before the Vikings: none has been found, but linguistic evidence suggests that they were known. What is certain, though, is that the Vikings brought with them the idea of an internationally tradable currency. In the ninth and tenth centuries they flooded Ireland with huge quantities of silver, which was the basis for their whole monetary system. Some of it originated in raiding (the known haul of silver from Viking raids on Frankish territory in the ninth century alone is 20 tonnes). Much of it came from trading with the Islamic world. It originated in central Asia, was brought to the great Arab cities where it was minted and thence sent, as payment for trade goods, up the Russian rivers and on to Sweden. This shiny metal is thus a tangible form of a wave of economic globalisation breaking over Northwest Europe, including Ireland.

A system of standard weights implies a lot more than increased trade. Someone has to set the standards and to police them. Tighter political control of this kind is possible in towns, and Dublin became the largest urban centre in Viking Ireland. It was founded first in the 840s as a longphort, a base for ships and raiding parties; and then, more permanently, as a defended town or dún around 917.

It is possible that the original longphort was at Islandbridge, although more recent evidence suggests it may have been at what is now South Great George’s Street, and while it seems probable that the longphort and Viking town were co-extensive, what is clear from the weights is that Viking merchants had a presence in the Dublin area even before it emerged as a fully fledged town. They were pioneers of the Irish market economy.