…The sheer size of the population dependent on the potato – three million or so – made the arrival in August 1845 of the fungus ‘Phytophthora infestans’, the cause of potato blight, the worst event in Irish history… 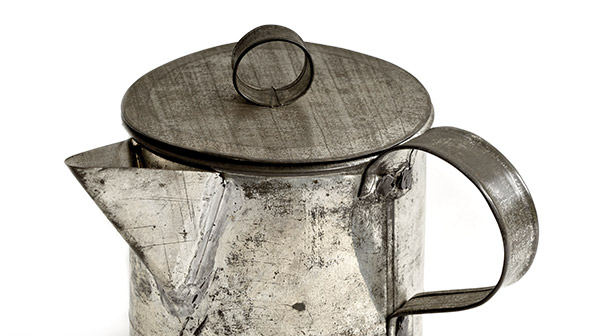 This humble object tells two stories of wandering people. It is a tin teapot, with a pouring lip soldered onto one side and the internal wall of the cup punctured with holes to make a strainer. It was made in Tuam, Co. Galway, by an old tinker, Mike Maughan, and collected in 1961. Maughan was responding to a request to make the kind of vessel that his family had traditionally made for nineteenth-century emigrants. Preparing for the long sea voyage to America, and unwilling to do without the tea for which the Irish had acquired an insatiable thirst, emigrants would buy these specially-designed pots. They were made by travelling people in an era before ‘tinker’ became a term of abuse. The deftness of the object suggests that the Travellers were well attuned to the market for their goods.

It is telling that Irish folk culture developed its own objects specifically for the act of emigration. The sheer scale of outward migration in the decade of the Great Famine is staggering: 2.1 million people. More people left Ireland in the 11 years immediately after the famine than during the previous 250 years. Some left on what Thomas D’Arcy McGee first called ‘sailing coffins’, and many were ragged, famished and diseased. Many settled permanently in Britain, especially in ports such as Liverpool; around 340,000 went to Canada and 1.5 million to the United States; smaller numbers settled in Australia, New Zealand and South Africa. Even after this first wave of refugee migrants, Irish people continued to leave in droves, impelled not by hunger but by the push of poverty and the pull of urban industrial life. Between 1856 and 1921, between 4.1 and 4.5 million adults and children emigrated (passenger lists show large number of children travelling alone). It is especially striking that, almost uniquely, Irish emigration was as heavily female as male—the Irish maid, and later the Irish public school teacher, were as much stock figures in American life as the Irish navvy or publican.

At one level, these experiences were part of European life: 26 million Europeans left for the New World between 1840 and 1900, and emigration was a significant aspect of life in every country except France. Ireland, however, was an extreme case—in the proportion of the population that emigrated, in the persistence of mass migration, in the number of women who went and in the very low rate of return, even from nearby England. Emigration became, not a response to crisis, but a natural expectation. ‘Children’, wrote one contemporary observer, ‘learn from their childhood that their destiny is America; and as they grow up the thought is set before them as a thing to hope for’. Ironically, the leaving of Ireland became one of the real markers of Irish identity. Leopold Bloom, in James Joyce’s Ulysses, asked to define a nation, says it is ‘the same people living in the same place’. Then remembering that he is Irish (and Jewish), he adds ‘or also living in different places’. The remarkable fact was that the Irish, scattered among the continents, did retain some sense of being ‘the same people’.