…But what is most striking are the images on the right-hand side of the cross: a sword and hurley stick and ball – one of the first images of the ancient game… 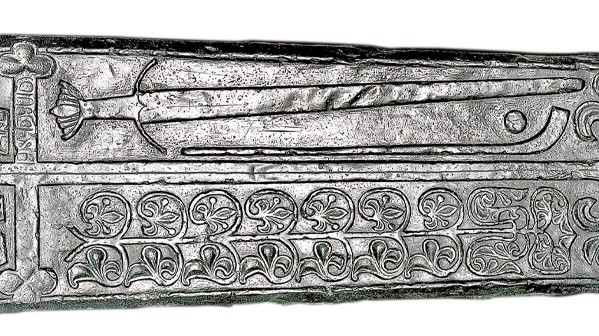 This 1.75 metre-long stone was uncovered in the graveyard of the ruined church at Clonca on the Inishowen peninsula, in Co. Donegal. Made of dark limestone, it is finely carved with a crucifix and a floral motif. The inscription says FERGUS MAK ALLAN DO RINI IN CLACH SA/MAGNUS MEC ORRISTIN IA FO TRI SEO. ‘Fergus Mac Allan made this stone/Magnus Mac Orristin of the Isles under this covering’. Most striking are the images carved to the right of the cross: a sword and hurley and ball. The sword is a typical late-mediaeval variety from the west of Scotland. The hurley and ball suggest that Magnus was famed for his skill at what was called winter hurling, a form of the game played in the north of Ireland and in Scotland.

English sources divide Irish military forces into horsemen, kerns and gallowglasses. There were professional soldiers in the first two categories, but their ranks were swollen in times of war by ordinary farmers—only the clergy and the learned classes were exempted from duty. (Remarkably the Irish horsemen still refused to use stirrups—a striking testament to the conservatism of indigenous culture.) Gallowglasses, of whom Magnus was one, were professional soldiers. The word (gallóglach), which means ‘foreign warrior’, is first used in the late-thirteenth century in reference to mercenaries recruited from the mixed Scottish-Norse population of the Western Isles. Throughout the fourteenth century, large numbers continued to arrive from the islands and highlands of Scotland, drawn from the losing factions in internal conflicts.

From the beginning, however, these Gaelic-speaking mercenaries were integrated into Irish society. Two gallowglass families in particular became prominent in Irish affairs: the MacSweenys (former lords of Knapdale in Argyle) and the MacDonnells became, respectively, sub-chiefs of the O’Donnells and the O’Neills. The MacSweenys spread southwards from Tirconnell (Donegal) into Connacht and then into Munster, where they served the various MacCarthy clans. The MacDonnells, meanwhile, spread into Co. Mayo.

Gallowglasses had padded coats, helmets, daggers and the distinctive long-handled axes that marked them out. The warrior was accompanied by a manservant to carry his equipment and a boy to carry and cook his food; the unit of three was known as a spar, and 100 spars was the standard grouping. These men were quartered on the general population (a practice known as bonnaght), a cruel imposition in time of protracted war. As warriors, the gallowglass had a reputation for do-or-die courage. One account of 1534 notes that ‘these sort of men be those that do not lightly abandon the field but bide the brunt to the death’, and the annals mention whole battalions of gallowglasses dying together in battle. This professional ethic raised the level of militarisation in Gaelic society, making it a more formidable barrier to the expansion of English control.