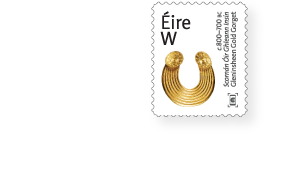 The marks that run through the ridges on the right-hand side of this dazzling gold collar show that it was roughly bent in two before being thrust into a rock fissure in the Burren, in Co. Clare, where it was found by a boy hunting rabbits in 1932. This folding is no accident: most of the other eight surviving examples of this uniquely Irish object were bent in the same way. They were, it seems, ‘decommissioned’ before being buried; such was their power that they had to be broken before being let out of the hands of their owners.

The Gleninsheen gorget is a technical and artistic achievement at the apex of goldworking in the Europe of its time. It was made by applying a range of techniques: repoussé, chasing, raising, stamping, twisting and stitching. The discs at the terminals of the collar are decorated with spiral patterns of extraordinary finesse. This kind of work, examples of which are heavily concentrated in Munster, can only have come from a highly evolved society with a population dense enough to support specialist artists, and sufficiently settled to develop its own sophisticated traditions.

There is evidence that gorgets like this one may be an ultra-luxurious and superfine expression of a contemporary European fashion. On mainland Europe c. 1200 BC one of the most important high-status objects is the bronze cuirass, a piece of armour that fits the whole torso. This highly decorated armour is evidence of the emergence of a prestigious warrior caste. Bronze cuirasses are not found in Ireland (Irish warriors probably favoured leather body armour and leather helmets), but Mary Cahill of the National Museum has pointed out detailed similarities in structure and decoration between Irish gorgets and European cuirasses: the raised lines on the Gleninsheen collar match the lines on the armour that indicate the warrior’s ribs; the circular discs mimic the breast and nipples. What we have, then, is a very specific Irish version of the symbols of a European warrior cult. In Europe the object is bronze and takes the literal shape of the warrior’s body; in Ireland it is gold and abstract. Who needs ordinary bronze when the overwhelming symbolic power of gold can be harnessed?

The gorget may be a more self-consciously artistic representation of a European style, but it nonetheless belongs to the common ideal of a warrior elite. A rare rock carving from southwestern Spain in this period shows a warrior with sword, shield, spear and chariot. The shield has a highly distinctive V-shaped notch. Distinctive, that is, except for the fact that the only extant shield of this kind was found at Cloonbrin, near Abbeyshrule, in Co. Longford. The gorget, therefore, is a peculiarly Irish and especially refined expression of a warrior cult that extended far beyond Ireland.