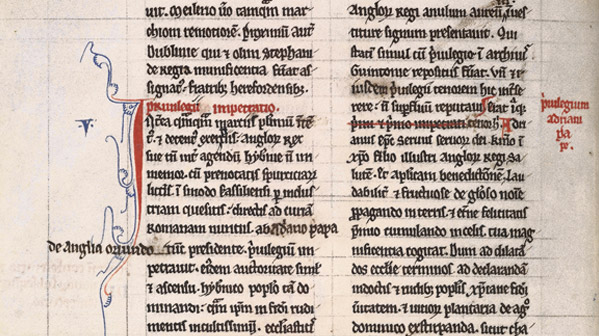 Laudabiliter satis et fructuose de glorioso nomine propagando in terres…tua magnificencia cogita: ‘Quite laudably and profitably, your majesty considers how to extend the glorious name on earth…’ Perhaps the most controversial object in Irish history is one that may not exist. Laudabiliter—the name of a bull issued by Pope Adrian IV to the English king Henry II in 1155—granted Henry the right to claim lordship over Ireland. Or did it? In the bull, Adrian (the only English pope) praises Henry’s plan to ‘reveal the truth of the Christian faith to peoples still untaught and barbarous and to root out the weeds of vice from the Lord’s field’. He then permits Henry to enter Ireland in pursuit of these good causes and expresses the wish that ‘the people of that land may receive you honourably and respect you as their lord’. The earliest source for the text of Laudabiliter is that seen here, in the Expugnatio Hibernica of the Cambro-Norman propagandist Giraldus Cambrensis.

Giraldus, the first foreigner to write a book on Ireland, came to Ireland at least three times (1183, 1185 and 1188) to see relatives among the Anglo-Norman invaders. He wrote his text to justify Henry’s claims and to further his own career in the church. Henry did not refer to Laudabiliter when he landed near Waterford in 1171; it does not appear in the English or Vatican archives; it is not referred to in subsequent papal correspondence with Henry. Giraldus, moreover, was not averse to a spot of forgery: Expugnatio also contains a letter from Adrian’s successor as pope, Alexander III, that few believe to be genuine. It is almost certain that Adrian did write to Henry regarding Ireland, and Giraldus’s text may even be partly genuine. As Professor Anne Duggan has pointed out, however, it fails to follow the format of every known papal declaration of the period. She suggests that Giraldus altered the order of the pope’s paragraphs to make the bull read like a stronger endorsement of a putative conquest of Ireland than it actually was. Moreover, Giraldus omitted paragraphs that required Henry to seek the consent of Irish bishops and rulers for his overlordship.

Laudabiliter is a dodgy dossier. Henry’s invasion of Ireland was pre-emptive. His fear was that Strongbow would establish himself as king of Leinster (through his marriage to Diarmait Mac Murchada’s daughter Aífe) or even of Ireland. Henry’s show of force (thousands of troops arrived with him in Waterford in October 1171) was aimed as much at his own Anglo-Norman vassals as it was at the native Irish. Henry’s ships were loaded not just with arms but with sealing wax, the material needed for royal edicts, but also for authenticating charters by which he granted away entire Irish kingdoms. Irish kings and chieftains were quick to declare their loyalty. The submissions of Diarmait Mac Carthaigh of Desmond and Domhnall Mór Ua Briain of Thomond were followed, on Henry’s progress northwards, by those of the kings of north Leinster, Bréifne, Airgialla and Ulster. The relative ease with which these rulers became subject to a distant Anglo-Norman king sharply contrasts with their unwillingness to submit to one of their own.