…Strongbow summed up the qualities of the Anglo-Norman elite: its energetic opportunism, military prowess and acquisitive efficiency… 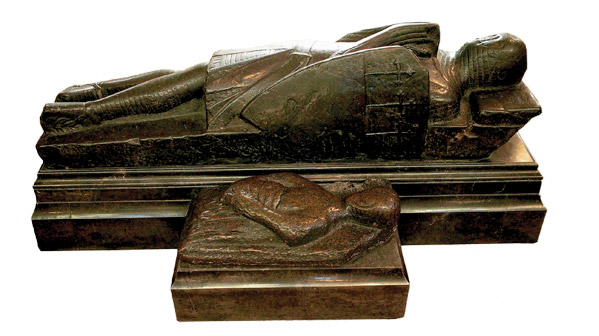 After the English king Harold Godwinson was defeated by the invading forces of William the Bastard, duke of Normandy, at the Battle of Hastings in 1066, his royal banner was taken to Dublin by his fleeing sons. It ended up in the hands of the high king, Toirrdelbach Ua Briain. The image of the Irish king flaunting the banner of a defeated English sovereign has a tragicomic irony.

There is little sense that Irish rulers in the decades after 1066 fully understood the implications of William’s victory. The Normans were ruthless, thorough and efficient conquerors. Their origins were in the Viking terrorisation of France that had forced the Frankish monarchy to cede them control of what came to be called Normandy. In England, they mixed extreme violence with cold calculation. During the so-called Harrying of the North in 1069–70, the Normans destroyed food stocks to create a murderous famine. Yet their operation was mostly a classic case of what historians call ‘elite transfer’: 5,000 families took ownership of English estates without disturbing the underlying economic structures. This elite was emphatically military: the heavily armoured Norman knight, virtually fused with his huge armoured horse into a terrifying machine, was a product of great wealth and highly specialised training.

It was inevitable that, having consolidated their rule in England and subdued Scotland and Wales, they would look to Ireland. Successive attempts to establish an effective unitary Irish kingdom had failed; the annalists had a stock formula for the chief ruler: ‘high king with opposition’. As early as 1155, at the Council of Winchester, the Anglo-Norman king Henry II discussed a possible invasion of Ireland. As it happened, internecine warfare allowed an opportunist lord, Richard de Clare, whom Henry had deprived of his title of earl of Pembroke, to beat the king to the punch.

In 1166, would-be high king Ruaidrí Ua Conchobair defeated and banished the Leinster overlord Diarmait Mac Murchada. Diarmait offered his allegiance to Henry II and received permission to recruit allies in Wales. In 1167 with the help of a small force of Flemings under Richard fitz Godebert, Diarmait reclaimed part of his kingdom. More Anglo-Norman adventurers arrived to support him, with Robert fitz Stephen, Hervey de Montmorency and Maurice de Prendergast helping him take Wexford. The most significant arrival was de Clare, known in Irish history by his nickname Strongbow. He captured Waterford in August 1170, married Diarmait’s daughter Aífe, went on to take Dublin and fought alongside Diarmait until the latter’s death, in 1171.

Strongbow summed up the qualities of the Anglo-Norman elite: energetic opportunism, military prowess and acquisitive efficiency. He died in Dublin in April 1176. The plain, almost blunt monument that stands over his grave in Christ Church is at best a symbolic representation of Strongbow. His original monument was, as an inscription recalls, ‘broken by the fall of the roof’ in 1562 and ‘set up again’. Strongbow’s most important monuments were to prove more enduring.