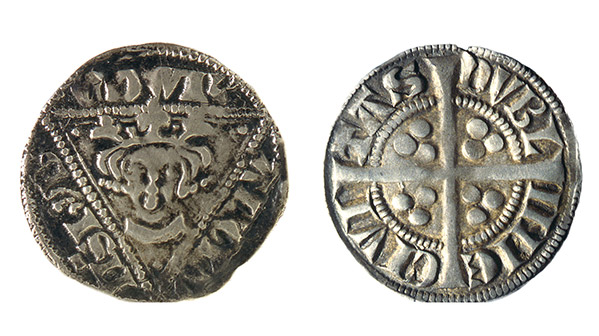 The significance of these coins is not the objects themselves, a penny from the 1280s (top) and a groat from 1460, but the gap of almost 200 years between them. Coins are tokens of the health of the colonial Anglo-Norman economy in Ireland. That the colony produced virtually no new coins for such an extensive period is striking evidence of the series of disasters that overtook it during the fourteenth century.

‘When sorrows come’, says Hamlet, ‘they come not single spies, but in battalions’. Four big battalions of sorrows beset Anglo-Norman Ireland: the invasion of Edward Bruce from Scotland, the Great European famine, the Black Death and the Hundred Years War. The long and bloody wars of the fourteenth century, as the English monarchy struggled to assert control over France, took a heavy toll on the Irish colony, used as a source of men, provisions and money for the English war machine.

In 1315 the Scottish king (of largely Anglo-Norman stock) Robert Bruce was at war with England; he sent his brother Edward to Ireland to open a second front. Bruce was proclaimed King of Ireland by his Irish supporters on his arrival in 1315. His attack on Dublin was repulsed, however, and he was killed in 1318. His intervention was disastrously destructive: the Irish annals described him as ‘the destroyer of Ireland in general’. Irish forces took advantage of the Bruce invasion to plunder Anglo-Norman towns, with the O’Tooles and O’Byrnes attacking the coastal towns of Wicklow, the O’Mores raiding Laois and the O’Hanlons besieging Dundalk.

Concentrated as it was in crowded and un – hygienic towns, the Anglo-Norman population was much more susceptible than the rural native populace to the ravages of epidemic disease. The Black Death, the combination of bubonic and pneumonic plague that decimated Europe, was preceded in Ireland by severe outbreaks of smallpox and influenza in 1327 and 1328. The plague arrived in 1348 and raged for three years. The Kilkenny friar John Clyn wrote of himself ‘as if among the dead, waiting till death do come’. It has been estimated that the Black Death killed between one-quarter and one-third of the population, with disproportionate mortality again in the towns. Some medieval towns, such as Fore, in Co. Westmeath, and New Town Leys, in Co. Laois, disappeared altogether.

It has been estimated that Ireland’s population had risen to over one million by 1300. By the fifteenth century it may have fallen to as few as 500,000. This decline affected the indigenous population as well as the colonisers, but the balance between them also shifted. The extent of Anglo-Norman control shrank, remaining strong in the areas around Dublin and east Leinster but becoming intermittent elsewhere. The revenue of the Irish exchequer declined and English monarchs were forced to contemplate new invasions to re-establish what had once seemed a secure lordship.