…As an exercise in verbal and visual persuasion, the roll is a brilliant early example of targeted advertising. It did the trick: the king restored Waterford’s shipping monopoly… 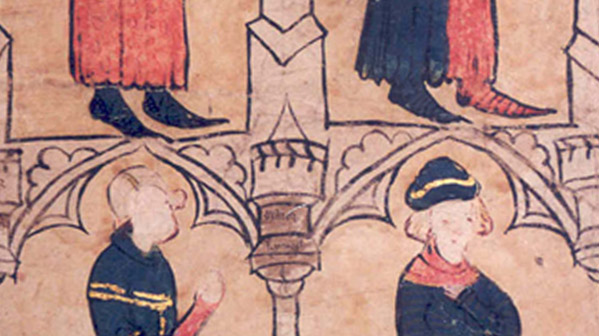 In the 100 years after the Anglo-Norman invasion, more new towns were established in Ireland than at any other period before or since. The existing Hiberno-Norse cities of Cork, Wexford and Limerick were rejuvenated, while Henry II declared Waterford and Dublin royal ports. The towns became centres of an increasingly efficient governing bureaucracy of mayors, judges and tax collectors.

Waterford, where both Strongbow and Henry had landed, initially enjoyed the biggest boost, becoming the main link between Ireland and the royal house of Anjou’s rich possessions in France. In the early-thirteenth century, however, this preeminence was threatened by the rise of William Marshall, husband of Strongbow’s daughter. Marshall, who developed his own port at New Ross, became immensely powerful, effectively ruling England as regent for three years after the death of King John in 1216. With the accession of Henry III, Waterford again pressed its claims to a monopoly on shipping. The result was a compromise: all ships, except those connected to Marshall’s English or Irish possessions, would have to land at Waterford.

The compromise was unenforceable, and there were several pitched battles as Waterford tried to prevent ships landing at New Ross. Eventually, with the general decline in trade in the fourteenth century, Waterford’s authorities took their claim for a renewed monopoly to King Edward III in 1373. They created a four-metre-long charter roll, containing documents or transcripts relating to the city going back to 1215. The charter roll also has seventeen remarkable illustrations. Among them are portraits of five kings of England, including the earliest contemporary portrait of a mediaeval English monarch, Edward III (shown opposite); the earliest portraits of a judge in either Britain or Ireland; of justiciars (governors of Ireland); of the mayors of Dublin, Waterford, Cork and Limerick; and the earliest view of an Irish city, Waterford itself.

Eamonn McEneaney of Waterford Museum of Treasures calls the charter roll ‘the mediaeval equivalent of a PowerPoint presentation’, designed to ‘flatter the king, add weight to the legal arguments and keep those listening to the mayor’s presentation focused on the facts being elaborated’. The roll is a brilliant early example of targeted advertising. It worked: the king restored Waterford’s shipping monopoly.

The bitterness of the fight over commercial privileges between Waterford and New Ross shows that, even in the crisis-ridden fourteenth century, there was much to fight over. The variety of trade pursued in Anglo-Norman Ireland can be judged from the range of goods on which tolls were levied in the towns: wine, salt, foodstuffs, horses, cattle, hides, wool, cloth, iron, lead, tin, dyes, timber, millstones, nails, wax and so on. Town life was abuzz with small industry. The Great Parchment Book of Waterford (1361–1649) lists goldsmiths, tailors, shoemakers, weavers, mercers, cordwainers, tanners, saddlers, smiths, carpenters, masons, fishermen, vintners, butchers, bakers and millers. Most, to judge from their surnames, came from southwest England. Their descendants became a permanent part of Irish life.